Teachers rally at The Forum

Thousands of children missed a day of school yesterday as teachers held a one-day strike.

More than 70 schools in Norfolk were affected by the walk-out, which was led by the National Union of Teachers.

In Norwich, more than 200 people gathered to protest pay, conditions and changes to the curriculum.  More at MustardTV

I'm proud to take strike action because I LOVE my job and enjoy working with my colleagues and our students. I'm on strike because I want teaching to be a profession that people rush to join. Currently, 40% of teachers quit in their first five years and teacher suicide rates have risen 60%. The way we work currently is NOT sustainable or fair. Every child deserves a happy, valued and QUALIFIED teacher. Support the Strike, GOVE MUST GO.

The N.U.T. warns there may be more strikes ahead.

Posted by Barbara Suzuki Norwich at 22:44 No comments:

Norwich was represented at the march entitled Stand up to Racism and Fascism in London's Trafalgar Square on March 22.

Norwich-based photographer Ann Nicholls of  Look, See, Click Photography was there to record the occasion: 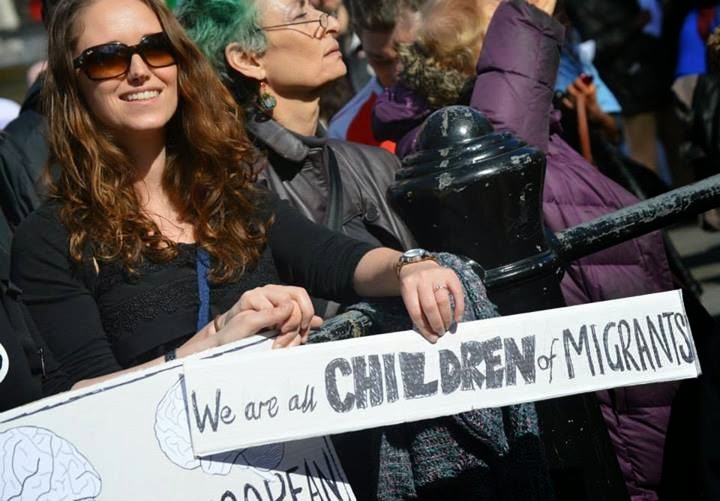 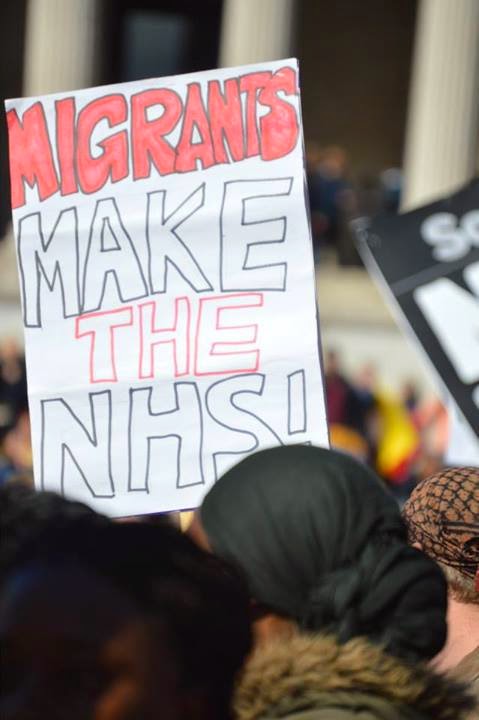 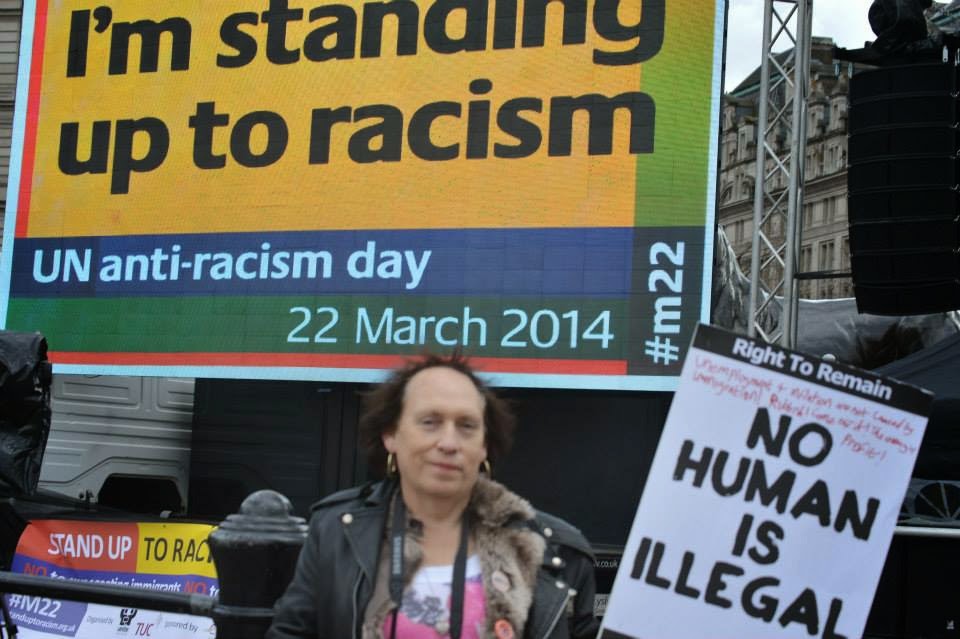 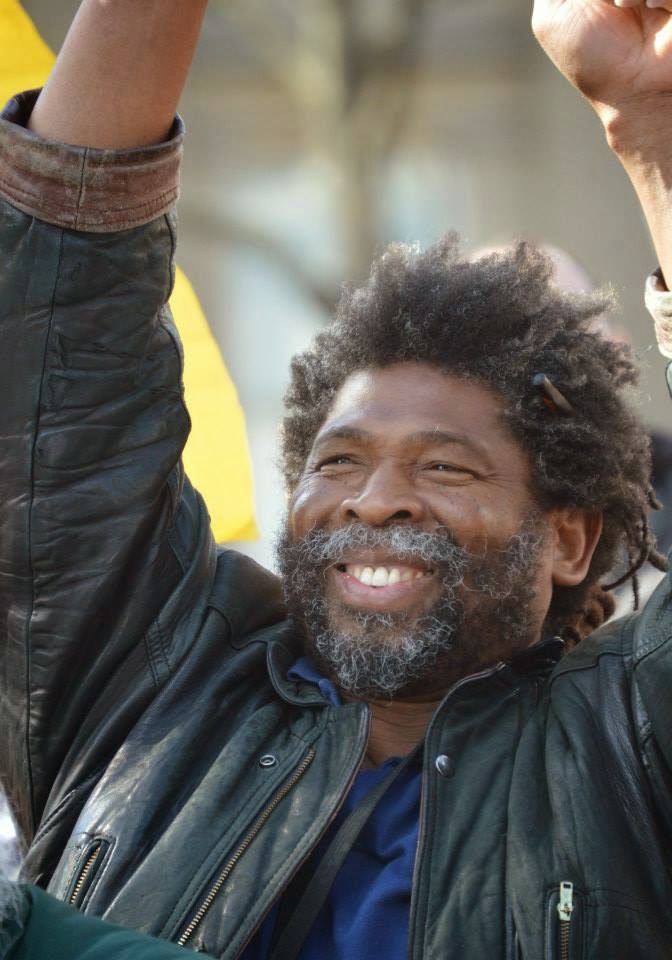 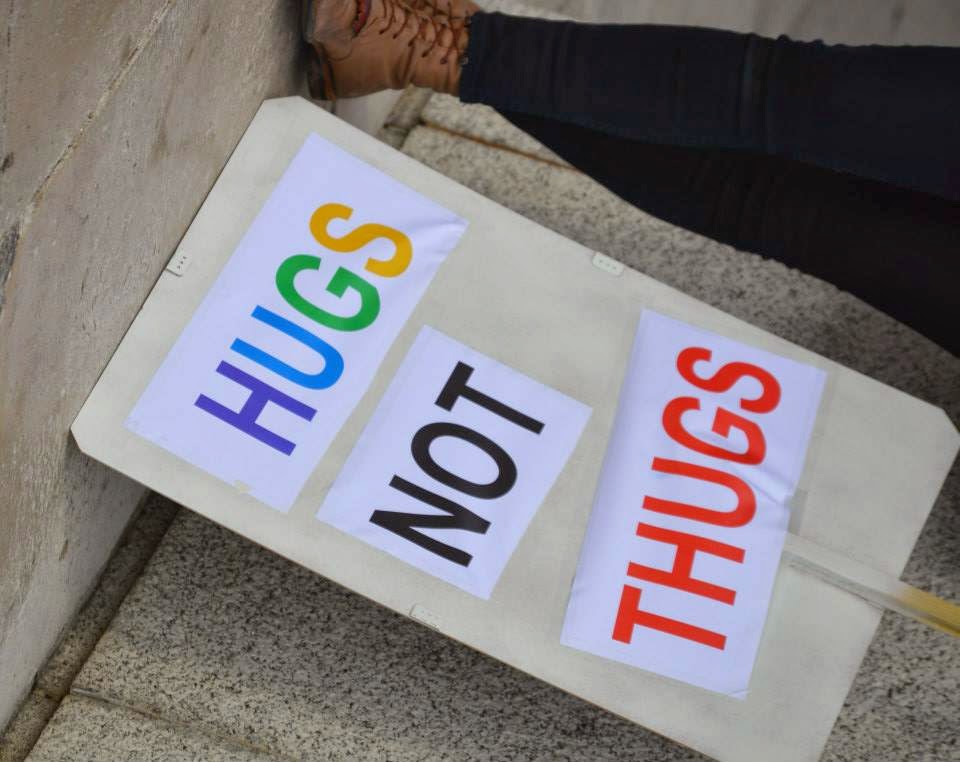 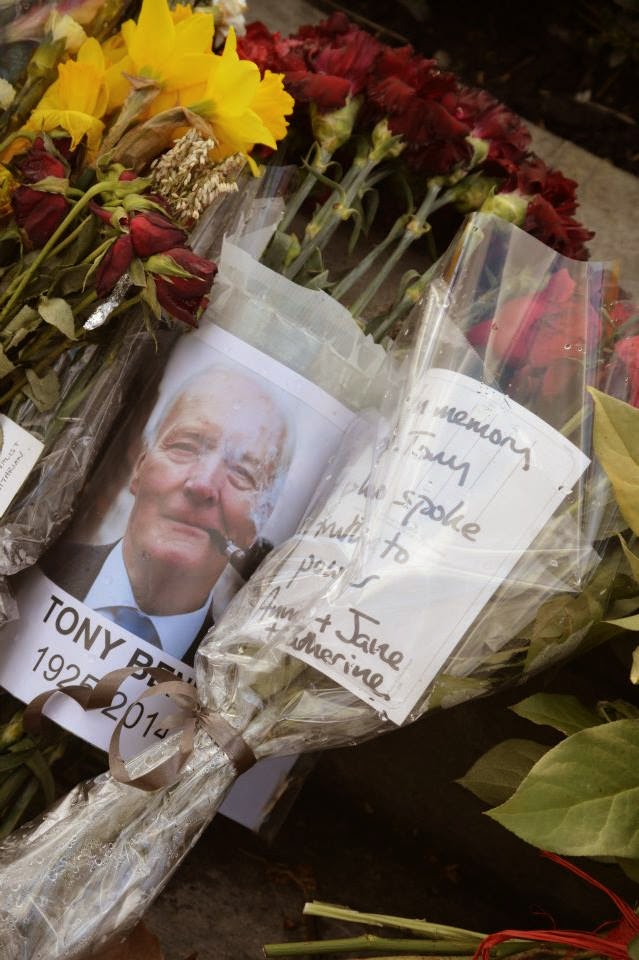 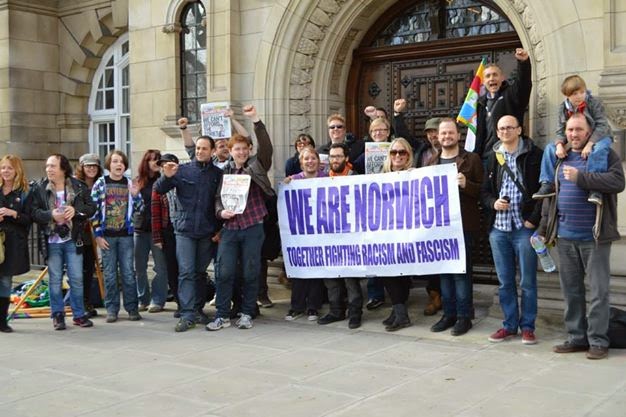 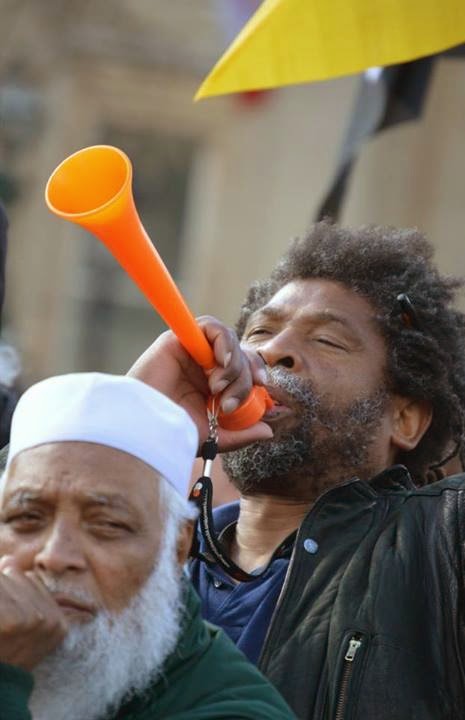 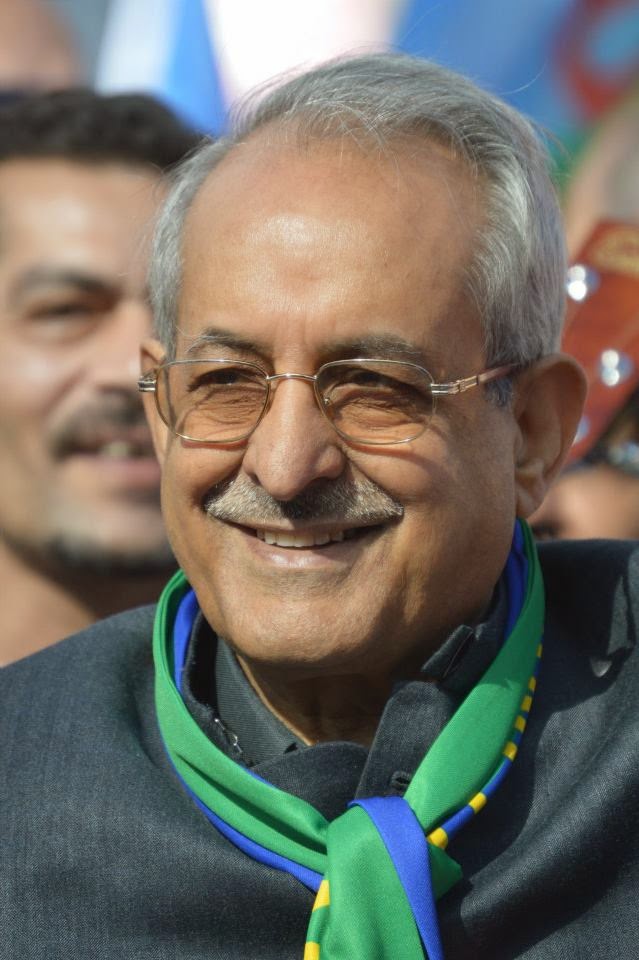 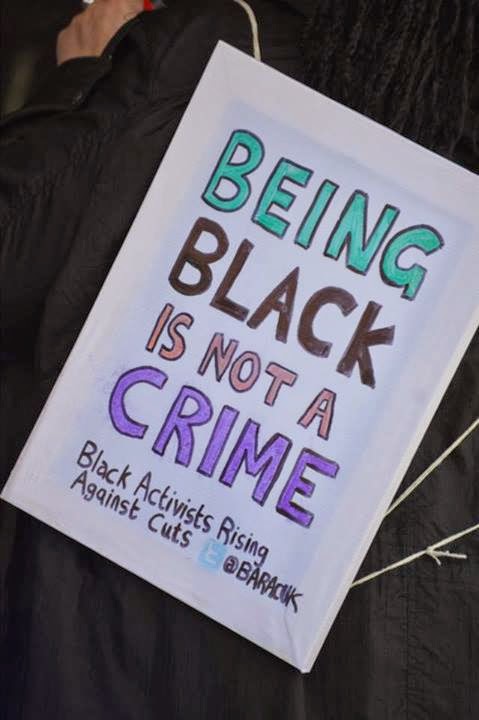 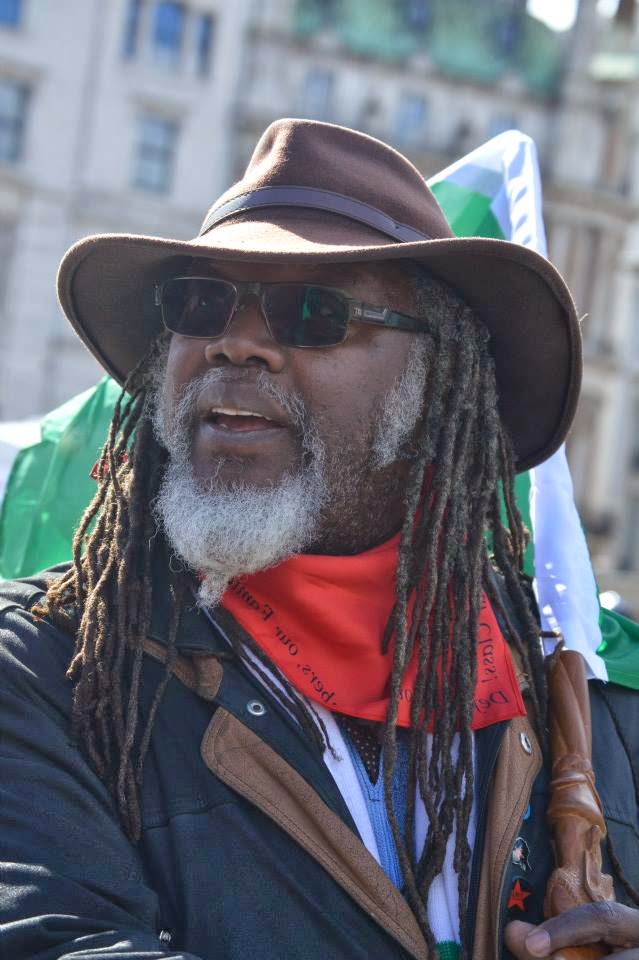 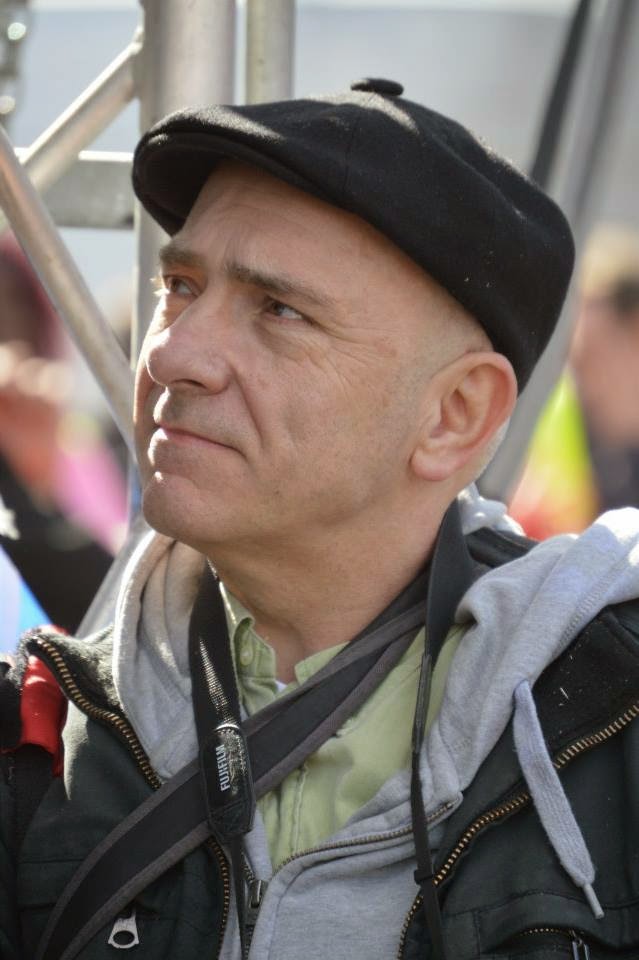 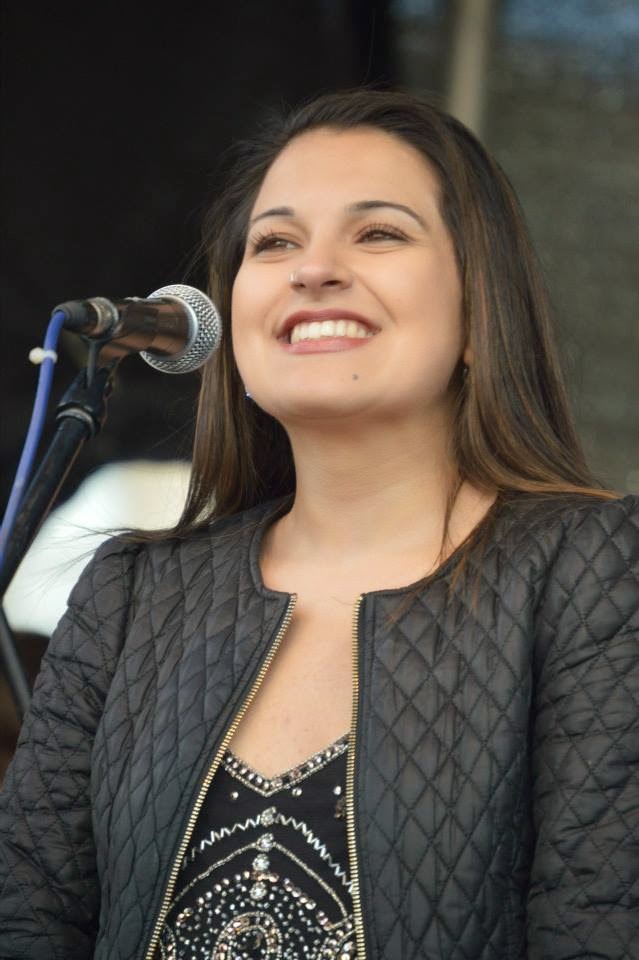 All Photographs by Ann Nicholls of Look, See, Click Photography

Posted by Barbara Suzuki Norwich at 04:51 No comments:

Peterborough inconvenienced by the EDL

The EDL (English Defence League) will be marching through Peterborough next weekend – and will be met with a counter protest by the Peterborough Trades Union Council (PTUC).

Cambridgeshire police said the EDL march will start at 2pm on Saturday, March 29, in London Road and proceed over Town Bridge, past Bridge Street police station and then congregate on Lower Bridge Street at Peterborough Magistrates’ Court.

Temporary road closures will be in place on London Road and Town Bridge while the protest takes place.

The PTUC march will start about 12.30pm at Bishops Road car park and proceed along Rivergate, and congregate at the Key Theatre car park.

Again, road closures will be in place on Rivergate, Bishops Road and some surrounding streets while the protest takes place.

These are very similar routes to those used by the EDL and opposition in 2010 when the protests passed off largely peacefully.

These routes will balance the concerns of local people and businesses in Peterborough, while responding to the wishes of the EDL and PTUC.

It provides central locations for both protests while allowing the majority of businesses in the city to continue as usual.

We understand that for businesses in the Rivergate area there will be an impact during the protest and we are working with those business owners, alongside the council, to minimise this and look at alternative ways of drawing in business over the weekend.
At this stage we cannot confirm numbers likely to attend. As and when we have further information we will share this with the public through our various established links with the community.

Posted by Barbara Suzuki Norwich at 07:36 No comments:

From EDP24 by Dan Grimmer And Sam Russell:

A Norfolk UKIP county councillor facing electoral fraud charges has likened the allegations to “getting a parking ticket”.

Matthew Smith, who represents Gorleston St Andrew’s division and is also the UKIP prospective parliamentary candidate (PPC) for Great Yarmouth, is one of three men who are facing charges.

The 26-year-old said he “completely denies” the allegations, which relate to forged signatures on nomination papers.

He is facing suspension from Norfolk County Council’s UKIP group while the case is ongoing, and he said more will be known about his position as UKIP PPC for Yarmouth after his Norwich Magistrates’ Court date on April 4.

Mr Smith was elected last May.

Together with two other men, he is accused of returning fraudulent nomination papers in the Norfolk County Council elections held in the Great Yarmouth district between March and April 2013.

The trio have been reported for summons.

The charges were authorised by the Crown Prosecution Service and follow an investigation into allegations of electoral malpractice reported to Norfolk Constabulary last April.

Mr Smith said he had not been charged, and added:

It’s no different to a parking ticket in that sense.

I’ve not been charged and the opinion of my solicitor is I might not be charged.

He said he had “no problem” with his suspension from the county UKIP group, and on his position as Yarmouth UKIP PPC said: “More will be known when it gets to April 4.”

I’m very concerned that police issued the statement [to the press] before they informed me.

That’s bang out of order.

It doesn’t seem like the CPS or the police know their backside from their elbow when it comes to this case.

Daniel Thistlethwaite, 19, of Station Road, South Belton, and Michael Monk, 60, of Freeman Close, Hopton, will be jointly charged with Matthew Smith of one count of supplying a nomination paper to a returning officer knowing it to contain a forged signature.

A spokesman for Norfolk County Council said: “We are aware of the allegations made against councillor Smith.

“For the time being, while the prosecution is being pursued, there is no legal requirement for him to stand down as a county councillor.”

However, Toby Coke, leader of the UKIP group on Norfolk County Council, said he was looking to suspend Mr Smith.

These are very serious allegations, which will be subject to court proceedings. Therefore, it would be inappropriate for me to make any comment about the substance of the matter.

However, I can confirm that I am in the process of suspending councillor Matthew Smith from the UKIP Group at County Hall, with immediate effect, pending the outcome of the court case.

Investigations began after a complaint was made ahead of the county elections on May 2.

Mr Smith, who is Great Yarmouth’s UKIP prospective parliamentary candidate, was the local party agent for the election campaign.

Posted by Barbara Suzuki Norwich at 11:11 No comments:


From Searchlight by Sonia Gable

On the occasion of International Women’s Day today, I wholeheartedly welcome the launch by Marina Yannakoudakis MEP of a campaign to tackle the global scandal of female genital mutilation (FGM).

Mrs Yannakoudakis, a Conservative MEP for London, has joined with other campaigners, including the editor of the London Evening Standard Sarah Sands, to put forward three clear and essential demands:

• A more robust approach to bringing adults behind FGM to justice.

• Better international recording and reporting of FGM to reveal the true scale of the scandal.

• International “aid conditionality” – to use development funding as a moral lever on countries where FGM is allowed or even condoned.

Mrs Yannakoudakis says mutilation is a form of child abuse, pure and simple, and must be treated as such. It has been a criminal offence in the UK since 1985, yet there has not yet been a single prosecution.

Last month she held the European Parliament’s first high-profile hearing on FGM, pulling together experts from across Europe to discuss best approaches to measuring and tackling the practice.

She said: “This is an appalling crime against children – one that is veiled in superstition and secrecy and hidden from public view. It happens to young girls who in many ways are at the margins of society, often isolated by a closed culture and lack of integration.

“I believe misplaced sensitivities over religion, race and heritage are behind that fact that in Britain there has been not one prosecution. If this appalling abuse were happening on such a scale to young, white, middle class girls I believe there would be no shortage of court cases or convictions.”

Mrs Yannakoudakis is right in highlighting “misplaced sensitivities over religion, race and heritage”. For a very long time, many antiracists have shied away from tackling gender inequality in other cultures, believing that criticism of minority cultural practices or beliefs would conflict with their antiracism: that antiracism trumps feminism. Likewise with FGM.

Such views are misguided. First we should note that FGM is not condoned by any major religion. It is certainly not part of Islam, contrary to the claims of Islamophobes, although it has been adopted by many Muslim communities. The origins of FGM, which is practised in at least 28 African countries, parts of the Middle East, and immigrant communities from those countries in several other parts of the world, are shrouded in the mists of time but it predates Islam by several hundred years. It is likely that it evolved in primitive communities that wished to establish control over the sexual behaviour of women. Although it is widely performed at the age of 12-14 as a rite of passage to adulthood, it is increasingly carried out at younger ages.

Schools have a role to play in educating families, increasing awareness and creating a climate in which FGM is rejected as abhorrent and ultimately unacceptable. They may be reluctant to do so. Schools are rightly much concerned with safeguarding children, for example from bullying, but when I raised FGM with a primary school head teacher, the response was that this was a secondary school issue. Well no, research shows that it is carried out at younger ages too. When I pointed this out, the head referred to cultural sensitivities.

The point is not whether we are entitled to criticise the practices of a minority culture or whether the rights of women and girls should be subordinate to cultural or religious precepts. The issue is one of humanity and freedom. Everyone has an equal right to dignity and respect for their life, and to not be assaulted and abused. And abuse is what it is: none of the “justifications” for FGM – and several are put forward by its supporters such as that it is good for women’s health – have even the slightest validity. FGM, sometimes euphemistically called female circumcision as if it were as innocuous as the circumcision of baby boys, damages the ability of women to enjoy the gift of sex and give birth to children: a central element of life and identity for most women.

For too long this has been a secret suffering and a hidden scandal. Broader society has been kept in the dark or has chosen to look the other way. This must stop now.

Let’s ensure it does.

Posted by Barbara Suzuki Norwich at 01:09 No comments: