Simon Says It Was The EDL That Did It…


From Simon Cressy – Hope not Hate 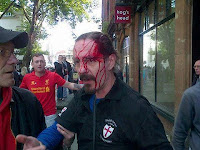 With the EDL crying in their pints and declaring that police brutality was the order of the day in Walsall (yesterday), at least one EDL activist is prepared to tell the real truth regarding how most of their injuries were caused.

Simon Blewitt from Chessington, Kingston Upon Thames admits that the behaviour of the EDL in Walsall today was as violent as ever and that his and others injuries were in fact inflicted upon themselves. 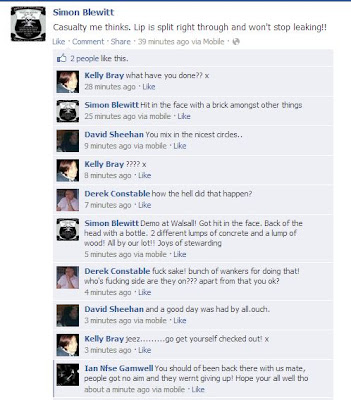 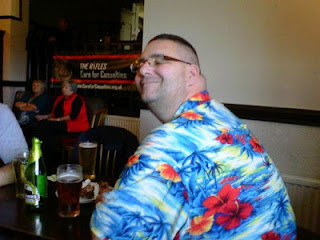 Simon Blewitt
Posted by Barbara Suzuki Norwich at 08:47 No comments: 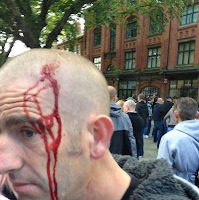 Members of the English Defence League (EDL) clashed with police in the Midlands town of Walsall on Saturday. Twenty-eight arrests were made, according to West Midlands Police.


Police use batons against members of the EDL in Walsall

Huge numbers of police were deployed in the town centre to keep order as members of the far-right group staged a protest against “militant Islam”.

According to the Birmingham Mail, missiles, including “bricks, bottles and litter bins” were thrown at the police as skirmishes broke out during speeches by members of the EDL.


Officers with shields and batons cleared the town centre by charging at the demonstrators. Members of the right-wing group were forced back onto buses to stop further clashes.
By Paul Vale

And according to the anti-fascist EDL News:


EDL take a battering as Walsall demo turns into violence


'We go where we want, when we want' was the battle cry from the English Defence League yesterday. In reality they go to where the police tell them to go when the police want them to go there.

They claim to be taking the streets back but in three years they have yet to take one street back.

Today was no exception in Walsall when a paltry turnout of 150 tried to attack hundreds of counter protesters but were stopped by police. 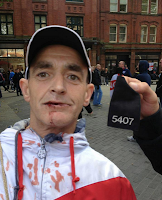 Getting bored of speeches by Tommy and Kev, EDL members decided it would be a good idea to pelt the police with bricks and bottles and try and charge their lines so the police decided to give them them a good battering, leaving over 30 'patriots' injured.

Opposing the EDL in Norwich

Several have asked about the We Are Norwich plans to counter the messages of hatred and division from the EDL.

Nick O'Brien of We Are Norwich has responded to your pleas for more information, saying:


(W)e only found out the confirmed new date last week!

The (date) for the Public Meeting will be Wednesday 24th October - am confirming the venue on Monday.

We have said all along we will have a counter-demo, that came out in the article in the EDP last week and it's in our "what we stand for".

To be honest - the details about that won't come out until nearer the time because we are in dialogue with the police and the EDL haven't yet said anything other than there is a demo. By the middle of next week we should have a) confirmed the public meeting, b) launched the press release and c) released a vague statement re: the counterdemo.

Thanks, Nick, there is certainly a lot of determination to confront the excesses of the far right in our fine city of Norwich, and it is in everybody's interest to keep the opposition planned and orderly.

News just in from Still Laughing At The English Defence League in Wallsall shows another damp squib "march" for the EDL: 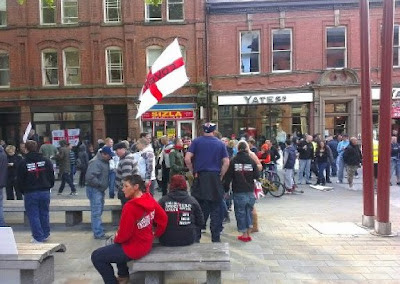 Massive EDL turnout of 50 in Walsall
﻿
And from HOPE not hate in Oldham: 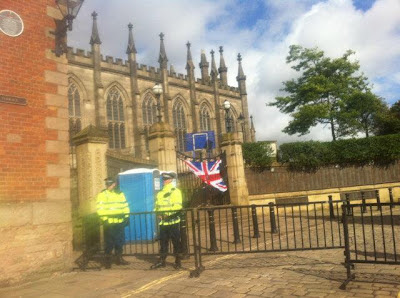 As you can see, huge rally here.
Nutzis, now is the winter of your discontent.
Posted by Barbara Suzuki Norwich at 12:50 3 comments:

Peaceful but resolute opposition to the EDL

Modern Norfolk is not hospitable to the far right.

The BNP were banished from our region.  The EDL will be the next to go.

For example, the following article from earlier this year describes how the Marlpit pub's owners on Hellesdon Toad, Norwich banned the EDL from meeting there.

Meetings of the controversial English Defence League have been banned at a Norwich pub after a string of complaints.

About 45 members of the group, which is associated with violent demonstrations, have met at the Marlpit pub in Hellesdon Road. No trouble was reported and another meeting was booked for last weekend. But after complaints about the meetings from an anti-EDL group, the pub’s owners, Enterprise Inns, banned the EDL and the meeting was cancelled.

A spokesman for Enterprise said the licensee had been “reminded of their obligations”. She said: “We have spoken to the publican, who we understand has instructed pub staff to ensure no further meetings of the English Defence League are hosted at the Marlpit pub."

It is understood the pub agreed to let the EDL hold the first meeting, but after receiving emails complaining, Enterprise Inns urged the landlady to not allow any more meetings.

Green Party councillor for Wensum ward, Lucy Galvin, said she was concerned by the EDL activity in the area.
She said:


“Norwich has a long and proud tradition, stretching back centuries, of welcoming people of many faiths.

“The Marlpit pub is a friendly local where people get along well. There’s no room here for groups which seek to set people against each other and cause trouble.”


The EDL, which has an East Anglian division, has attracted controversy since forming in Luton in 2009.

On its website the right-wing group says it protests “peacefully”, but its marches are often marred by violence and arrests, along with counter-protests by anti-fascist groups and trade unions.

The Norwich division of the EDL, which has 75 members on its Facebook page on the internet, is also planning a march through Norwich (in November).

A spokeswoman for Norfolk police said: “Norfolk Constabulary is aware of content posted online about a planned event, but we have not been formally approached about this matter.”

On its website, the EDL lists the banning of Reverend Alan Clifford of the Norwich Reform Church from using a market stall on Hay Hill as one of the reasons its planned march.

The church was banned from using the stall by Norwich City Council after a complaint it was publishing “hate-motivated” leaflets.

A city council spokesman said: “We have been made aware of this planned event. This is a matter for the police with whom we will be liaising closely in relation to any issues it may present.”

No one from the Norwich branch of the EDL could be reached for comment ().

Posted by Barbara Suzuki Norwich at 08:41 No comments:

EDL in action in Norwich

Please review this video glimpse into the past history of some EDL members in Norwich, and you will understand why there is such steely resolution in Norfolk citizens to oppose the thuggish EDL political agenda:

﻿
Posted by Barbara Suzuki Norwich at 09:28 No comments:

From EDP24 by Tom Bristow

The English Defence League will hold its first march in Norwich this November, citing a decision to ban a Christian bookstall as a reason for the demonstration.

Police confirmed they had been approached by the EDL about the protest for Saturday November 10, although a route is yet to be decided.

The EDL, which has 81 members on its Norwich Facebook page, listed the banning of Reverend Alan Clifford of the Norwich Reformed Church from using a market stall on Hay Hill as a reason for the march.

They believe the decision by Norwich City Council, following a complaint about anti-Islamic leaflets, violated freedom of speech.

On its website the EDL says it protests “peacefully”, but some marches have been marred by violence.

A campaign group called We are Norwich said it will hold a counter-protest to celebrate the city’s diversity.

Nick O’Brien from the group said: “The EDL do not represent the diverse, multi-cultural city.”

A police spokeswoman said: “We understand there may be concerns and feelings of vulnerability within a number of communities and we will be looking to work closely with the organisers, our partners and community leaders to help address these.”

Green Party councillor Lucy Galvin added: “Communities in Norwich have a long tradition of religious acceptance and living together respectfully.”

A Norwich City Council spokesman said the council would liaise with the police over the march.

The spokesman said: “We understand the march relates to a decision we took earlier this year following a complaint from a member of the public about published material which was considered to be hate-motivated.”


Posted by Barbara Suzuki Norwich at 23:15 No comments:

Clive Jefferson, the election manager for the BNP, loses yet another by-election for the party.

He's not the greatest advertisement for Lucozade energy drink. 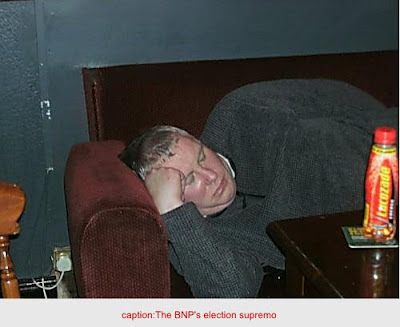 The results of the Trinity ward, Burnley earlier this month were as follows:

Photograph from Ketlan Ossowski's blog﻿ with thanks
Posted by Barbara Suzuki Norwich at 19:15 No comments: 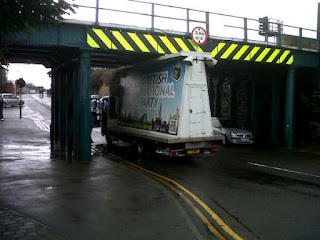 Posted by Barbara Suzuki Norwich at 18:46 No comments:

How BNP membership dues are wasted - I

The Electoral Commission has fined the British National Party a total of £2,700 for the late delivery of its statement of accounts for 2010.

The party co-operated with the Commission and both accounts were received on 21 February 2012, in accordance with a deadline set by the Commission.

Both fines have been paid in full.

“People have a right to know how parties are funded and how they spend their money. The British National Party has repeatedly failed to deliver accounts for the central party and its accounting unit on time in the past.

“However, since 2010 there has been an improvement in compliance. The 2011 accounts for the central party and accounting unit were delivered on time. We hope this improvement is maintained.”

For more information about the range of sanctions available to the Commission and how fines are calculated, visit:www.electoralcommission.org.uk/party-finance/enforcement/sanctions

Posted by Barbara Suzuki Norwich at 18:34 No comments:

THE NORFOLK AFRICAN COMMUNITY ASSOCIATION (NACA) INVITES YOU TO AN OPEN DAY IN CELEBRATION OF AFRICAN DIVERSE CULTURES.

Posted by Barbara Suzuki Norwich at 10:26 No comments:

About We Are Norwich

Below are the points of agreement and who has signed up so far.

The following have signed up to support WE ARE NORWICH:

Posted by Barbara Suzuki Norwich at 23:51 No comments:

Visit We Are Norwich latest press release for more

We are Norwich (click for webiste) is a coalition of individuals, representatives from political organisations, community groups and faith groups to oppose the visit of the English Defence League (EDL) to Norwich later this year - we will keep you informed.

We are Norwich (click for Facebook) plans to do all that it can to prevent the EDL from coming to Norwich - by organising stalls in the city, public meetings, and gigs. If the EDL does decide to come we will organise a safe and peaceful counter demonstration to show the EDL that they are not welcome and to celebrate multicultural Norwich.

The following people have signed up to our mission statement in a personal capacity so far and pledge support: