From Unite Against Fascism: 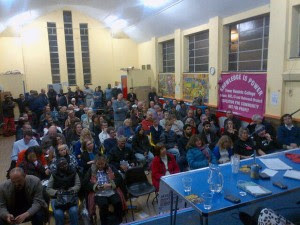 A packed public meeting called by the We Are Waltham Forest campaign showed the determination of local people to drive the English Defence League out of the borough for a second time.

Thousands of local people turned out on 1 September to block the EDL’s march route and prevent the fascists’ rally. The EDL’s 200 thugs were comprehensively routed.

But in a desperate gamble, the EDL has declared it will make a second attempt to demonstrate in the east London borough on 27 October.

The move has enraged people across Waltham Forest, who are disgusted at their community being targeted by the fascists in this way.

Tonight’s meeting focused on stopping the fascists again. It brought together a broad swathe of the local community, from trade unionists to faith groups, Turkish and Kurdish community group Gik-Der and the Woodcraft Folk.

Local MP Stella Creasy called for renewed unity against the EDL, while London Assembly Member Jennette Arnold declared there was ‘No place for the EDL in Walthamstow!’.

The meeting heard local rabbi, Richard Jackobi, express the overwhelming mood of unity and solidarity, saying: ‘We are all one human race. Human beings were created to be diverse.’

Irfan Akhtar of the Waltham Forest Council of Mosques said the success of the mobilisation against the EDL last month had given local Muslims the confidence to confront the EDL.

Kenroy Wilson, said his RMT rail union would do everything possible to stop the EDL using the tube on 27 October – RMT members have previously taken action to ensure that staff and members of the public are not endangered by the fascist thugs on the tube and railways.

There would be ‘no platform for EDL – literally as far as my industry is concerned’, he said.

And because the EDL threaten to march in Norwich on November 10,
We Are Norwich has called its own

Public Meeting: We Are Norwich


Posted by Barbara Suzuki Norwich at 22:50