The head of the EDL may have been cut off with the detention of Stephen Lennon in Wandsworth Prison, but the EDL zombie body still twitches violently.

On-line undead members of the EDL internet boards have apparently not learnt anything from the events of the weekend when Lennon and fifty other EDL members in uniform black balaclavas were intercepted by the police allegedly on their way to some planned illicit demonstration in London.

The knee-jerk EDL reaction, however, as expressed on the far right internet boards, has been one of mindless rage and defiance rather than sober reflection.  EDL members, or at least, the zombies amongst them, seem unable to grasp that flouting the law often has consequences.  ﻿ 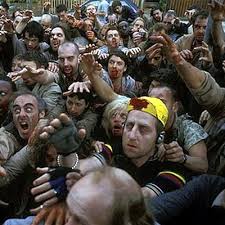 So the zombies left in the EDL still threaten to march on Norwich as planned - or rather shuffle along uttering incoherent groans and wails - in retaliation against what the EDL terms "oppression" by the police.

The hard core of the far right is persisting in behaviour that results in nothing but grief for the EDL, and the few remaining "Walkers" of the EDL are not adept at changing tactics.

That's why it is still important to resist the EDL, to show that their disruptive and destructive zombie marches are not welcome, least of all in Norwich.

And at the same time it is still important to suggest to the exploited EDL members who are not yet entirely brain dead that they urgently rethink their political strategy.

Public Meeting: WE ARE NORWICH


All welcome to participate as speakers advise on non-violent protest and how to avoid any trouble, in preparation for the counter demonstration against the EDL in Norwich 10 November﻿

**There will be police security at the meeting**

Posted by Barbara Suzuki Norwich at 11:04